The whole concept of the internet revolves around search engines. Even though Google is absolutely dominant in terms of both market share and popularity among users, other engines have their own benefits and markets where they are especially relevant.

For this reason, we’ve made a detailed guide of the similarities and differences between the top two competitors. The data below will discuss Bing vs Google usage and provide insights to both users and marketers.

Find in This Article:

In a world where customers’ expectations are high, and the competition is fierce, optimization can make or break a business. Optimization is the most important aspect of your brand’s virtual presence, so let’s see what’s the difference between Bing vs Google in 2021?

It’s essential to understand how the metrics differ to adapt your strategy to different algorithm requirements appropriately. Most of the features we’ve just added in Version II have been requested by our existing clients. That’s one of the things that matter in our business—listening and responding to feedback.

By comparing the two most popular search engines, we’ll help you get more from your marketing budget.

So, which browser is your cup of tea?

What is the Main Difference Between Bing and Google?

To get started, we’ll explore the categories that differ between the two and how those differences affect the overall user experience. From their target market and content to technical aspects, priority in ranking factors to revenue growth over the years.

Google takes over 200 unique factors into consideration to rank the organic search results. The developers often update the algorithms, so it can be quite challenging to stay on the first page of Google results, even once you rank in the top 10.

As the engine usage differs, when you type the same query, the results for Bing vs Google users will differ. However, what’s interesting is that, since 2019, both engines have been using the same core algorithm—BERT.

Here are some Google ranking factors:

Microsoft has a different approach which is why the Bing algorithm operates in a slightly different way. Remember, this goes for Yahoo! searches as well.

Here are some ranking factors of the second most popular engine:

Bing vs Google stats show many SEO experts cite keywords, backlinks, and social media presence as the most significant differentiators. The Bing approach can seem a bit outdated as it allows keyword stuffing. SEO has evolved into a more complex and strategic field, so you won’t get the desired first-page ranking by simply using the main keyword numerous times. Furthermore, Bing doesn’t pay enough attention to backlinks while the category is vital for Google’s SERP. That’s the thing, all the elements matter and need to be in sync these days, not only your on-page content.

Is Bing More Secure Than Google?

Google users are aware of the fact that their results are personalized, which can only mean one thing—the company stores and uses the data obtained from their user accounts, queries, and interests. Some even like that their browser history helps them skip a couple of steps in finding what they need.

Bing is less intrusive and takes just a portion of user data when displaying organic results, mostly related to geotagging and language use while browsing. Microsoft states that its engine focuses on helping users make informed decisions instead of navigating them in a certain direction. So, for the case of Bing vs Google privacy, our ruling is that Bing’s approach is definitely more security-centered. That’s how the two differ in a core way of presenting SERP.

With the latest lawsuit in March 2021, the competition seems to have an undisputed leader—Bing. But what was that all about? The issue was Google’s data collection while in incognito mode. While the company disputes all the allegations, claiming they’ve made it clear that private doesn’t mean invisible. The fact that the judges decided that Google has to face the lawsuit makes it enough to raise some valid concerns.

How Do Bing’s and Google’s Market Shares Differ: Overall, By Device, and Region

For mobile devices only, Google share is even more significant—94.84%, while Bing’s is only 0.42%. However, Bing seems to be more popular on desktop computers, with a 5.53% market share, while Google’s is 87.28%. With our SEO tool, it’s easier than ever to track your ranking by device.

It’s challenging to talk about Bing vs Google revenue because Microsoft and Alphabet report the annual total. For 2020, Microsoft reported a total of $143.015 billion, while Alphabet reached $182.527 billion.

Most of Google desktop traffic comes from the US, 26.79%. Brazil ranks second with 4,72% and the UK third with 4.03%. The report from Statista shows other countries where Google has over 90% share—India, Brazil, Spain, Italy, Hong Kong, and Australia. With our improved local tracking feature, you can now easily include multiple areas you’re focusing on. 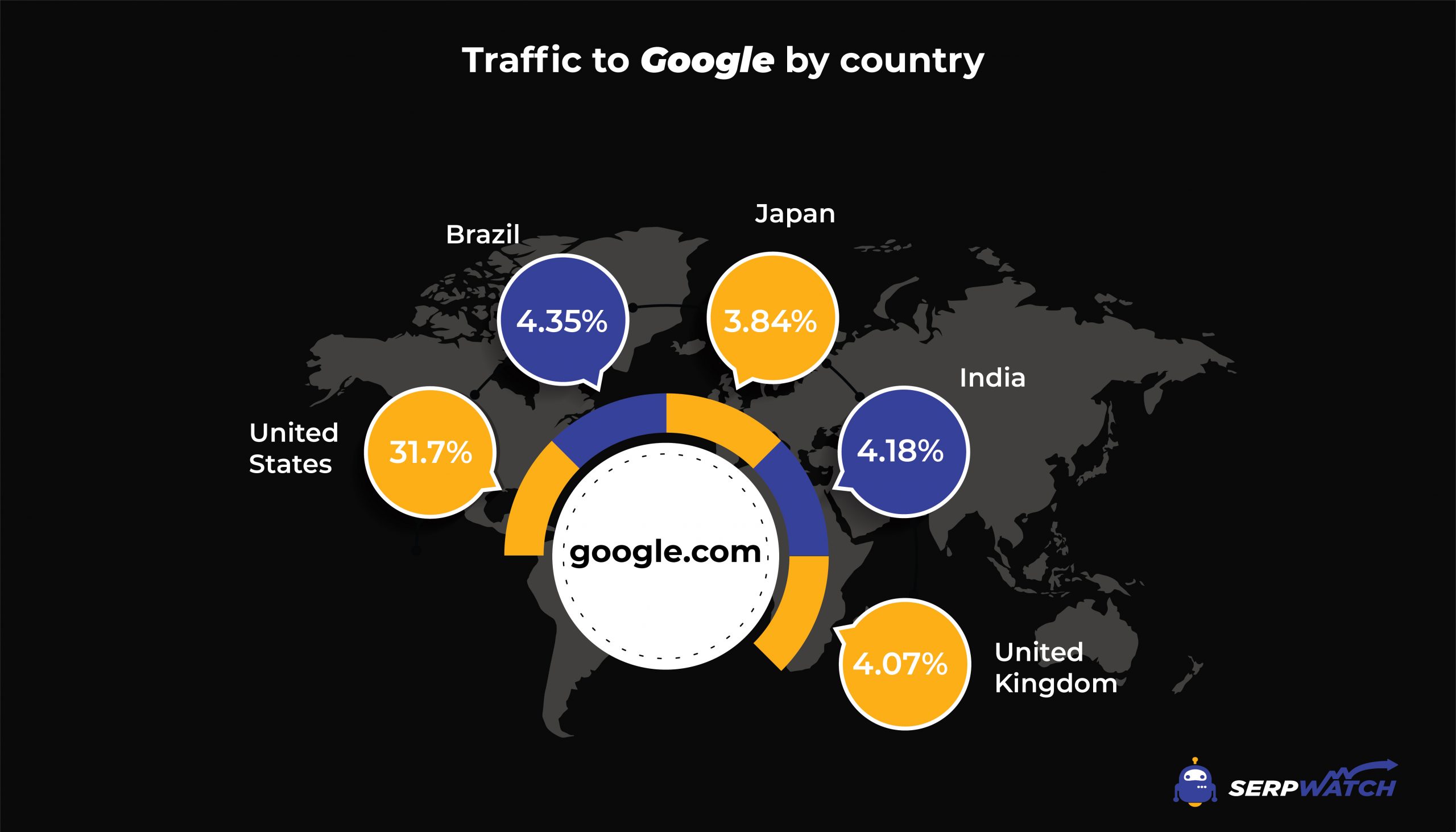 Let’s see how the two rank on the American Consumer Satisfaction Index scale. Considering the ratio of Google vs Bing market share and the massive gap between the two, the ratings don’t even favor Google that much. For 2020, it was 79 vs 71, respectively.

Moreover, Bing is surprisingly more popular in the US, possibly due to being a default browser on Microsoft Windows devices. Just under a third of all its desktop traffic—32.01%, comes from the US. China comes next, accounting for 23.74%. Japan, Germany, and the UK are also in the top five traffic sources for Bing. 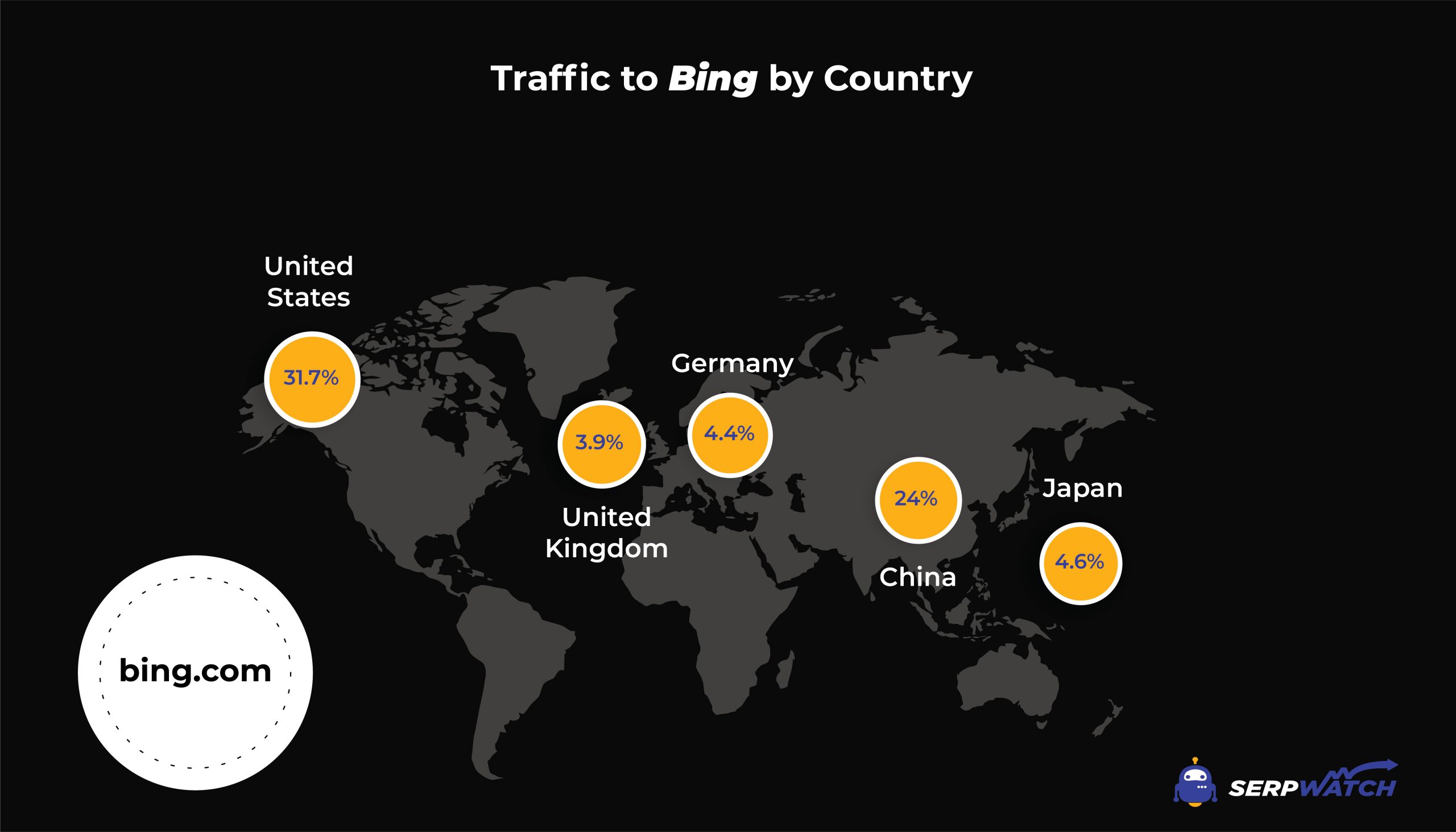 What’s the Distinction in Bing vs Google Usage For Multimedia Search?

This is another category where we can safely say Bing is dominant. Advanced search by image is not only aesthetically pleasing but can prove extremely helpful. If you’re not sure which term to search for, you can easily insert and find relevant results in an image search.

Multiple advanced search options (resolution, length, publication date, etc.) are available for videos. In fact, its filters can be compared with YouTube’s. Google probably doesn’t bother that much because they own YouTube.

We must mention the fact that marketers will appreciate here, SerpWatch has introduced a feature of tracking the results on YouTube as a separate engine.

Advertising on Bing vs Google in 2021—What Works Better?

Paying for advertising space that will show a website on the first page of search results basically works the same on both search engines. Companies can use an abundance of filters to precisely target their desired audience, such as location, age, gender, etc. Unfortunately, this creates a complex, love-hate relationship between most users and their browsers.

For the sake of comparison of the user habits and attitudes towards the two most popular ones, a survey by a market research agency, Clutch, examined which search engines are users most likely to click on a paid ad. The results for Bing ads vs Google ads were 6% and 63% for PPC, respectively. If you’re advertising on Google, bear in mind that you can import Google Analytics into our SEO tool with just a single click.

Bing is a better choice when it comes to competition. With such a diverse volume of content, a whopping 90.63% doesn’t get any organic traffic from Google.

What’s great about using SerpWatch is that you’ll get a list of the top-ranking pages using the exact keywords, so you can see how your competitors outperform you.

Some of the most important metrics for the advertising segment are CPC and CTR. The average CPC for Google ads is between $1 and $2, while for Bing, it’s $1.54. When it comes to the average CTR, Google has the upper hand once again. Across all industries, the average CTR is 2.83% vs 3.17%.

Bing Maps vs Google Maps—Which One is More Accurate?

As in many other aspects, Google maps are more popular, and the ratings are higher. But which parts of the online mapping industry has Google covered better than its competitor?

Their performance is measured through the directions, street view, display, local stores, transportation methods, and miscellaneous category of other widgets available. The first thing to mention is the major drawback of the Microsoft engine—they don’t offer the app. As mobile accounts for more than half of the total internet traffic, it’s an understatement that optimization for mobile matters.

When we break down Bing vs Google stats for travel options, Google wins by having cycling routes. The directions are quite similar, but Google’s data about traffic is more accurate. Local search is another segment in which Google dominates, as Bing’s results can be significantly outdated.

The way of presenting these results also makes Google stand out. The colorful representation of different categories makes it easier for users to navigate and find what they need. The street view is another category Bing has neglected to update, so it’s no wonder Google maps is leading in all recorded countries.

Bing vs Google Users—What Were Their Top Searches as of 2021?

We can make another direct comparison on the basis of what their users are looking up the most. An interesting piece of information is that the top two queries on Bing were Google products.

The top 5 searches by volume were:

Interestingly, 4 out of 5 queries match, but the order is different, and Google’s volume is much greater. 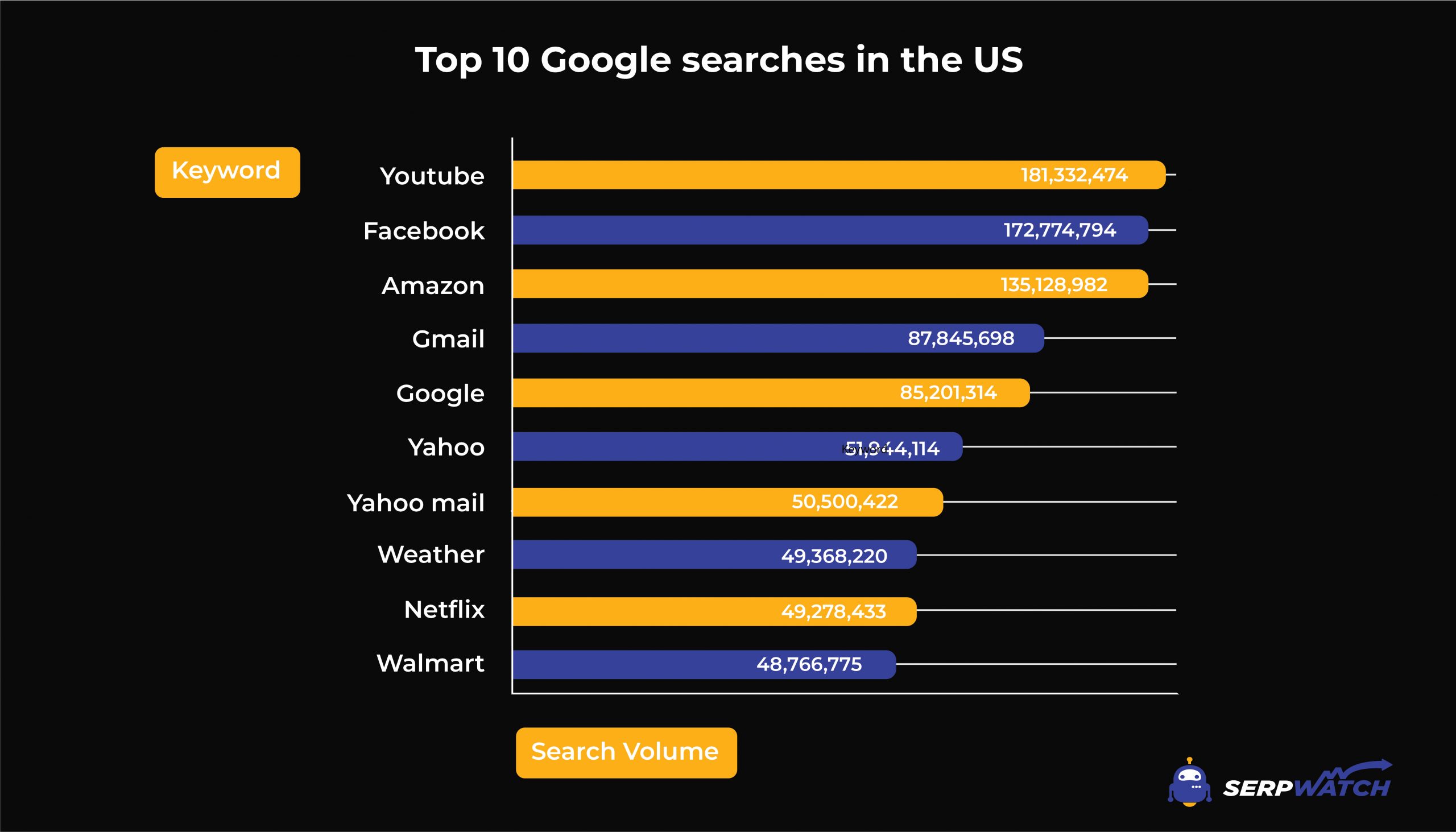 How Many People Use Bing vs Google?

In terms of users, there’s no doubt the numbers work in favor of Google, even though specific markets and types of searchers prefer Bing.

So, let’s see how we can estimate the numbers. We’ll start with the number of searches per second. The latest data as of June 2021 points to a stunning 92,655 Google searches in a single second.

As for the second most popular engine, there were 1.034 billion unique visitors in January 2021, which indicates how many people use Bing. That’s the traffic for both mobile and desktop devices. You’ve read that well, over a billion.

The latest stats for user demographics show that Bing users tend to be less tech-savvy and older than those who primarily use Google search. However, Microsoft reports 55% of their engine’s users conducting product research and 38% use it for brand discovery. That’s why marketers shouldn’t easily dismiss Bing’s value, especially the US-based ones.

The availability of languages these engines offer also plays a significant role in their popularity. Let’s take Bing vs Google usage of translators, for example. People rely on those services, especially while traveling. Their language processing systems are different, but Google wins the race in terms of numbers by offering 108 language options. For Bing, the number is 88, but there are certain advantages over Google translate. Users favor it for language learning and conversational purposes, especially its handy Phrasebook.

Both translators offer an option to download language packs in offline mode. It seems Google aimed for quantity here, while Bing chose quality. Each has its own perks, so the answer to which one is better depends heavily on the user’s needs at the moment.

Now, how many people use Google? The company doesn’t publicly disclose such data, but we can tell you the number is around 4 billion. And how did we estimate that number? The answer is—by examining the latest Global Digital Overview Report by We Are Social and Hootsuite. As of January 2021, there have been 4.66 billion active internet users. Considering that Google has the lion’s share of the market, our conclusion is a safe bet. The total number can translate to 59.5% of the world population. That would further imply around 50% are using the most popular search engine.

Your company’s presence in digital cyberspace is critical for success in a modern world driven by technology. Investing in optimization for the search engine of your choice is the only way to stay ahead of the curve.

We hope this article will help you do the right job on the two most popular search engines across the globe.